The latest string of severe weather began Thursday when multiple strong, devastating tornadoes occurred that took the lives of six people in the Southern states.

Thunderstorms reached the Northeast later in the day Friday, becoming locally damaging and going on to produce nearly 20 reports of wind damage across New York, Vermont, and New Hampshire. An EF-1 tornado also touched down on Friday, resulting in two injuries in Middlebury, Vermont.

The roots of this next severe weather threat for the East began on Saturday, targeting parts of the South once again. Damaging winds, large hail and possible tornadoes tore through areas from Texas to Tennessee. Severe storms even erupted Saturday afternoon as far east as North Carolina.

Dangerous flash flooding also unfolded across the area, with the National Weather Service issuing a flash flood emergency for metro Nashville and some surrounding areas.

Major flash flooding ongoing across the southern and eastern #Nashville metro. Sevenmile Creek at Blackman Road in south Nashville is in major flood stage at 14.49 feet – its highest level on record since the gauge was installed in Jan 2011 pic.twitter.com/VowolD2usS

Prior to Saturday’s storms, there had already been at least 90 reports of tornadoes and more than 300 incidents of severe weather over this time in the South, according to the National Weather Service’s Storm Prediction Center.

On Saturday there were another 240 preliminary reports of wind, hail or tornadoes from thunderstorms, including 16 preliminary tornado reports. These numbers may still change as the National Weather Service reviews the reports and assesses damage in the coming days.

The main severe weather threat on Sunday is forecast to extend from the tri-state area around New York City to the Carolinas and northern Georgia, including Atlanta.

“At this time, it looks like the primary threat for severe weather in the Eastern states on Sunday will be damaging wind gusts,” AccuWeather Senior Meteorologist Courtney Travis said.

“There is also some concern for isolated tornadoes as well,” Travis added.”

While forecasters say the threat for tornadoes is relatively low in comparison to recent threats in the South, they also warn not to discount the damaging wind threat.

“There is a lot of wind energy for storms to tap into moving into the East Sunday,” explained AccuWeather Meteorologist Jake Sojda. “It won’t take much to get wind gusts to 70 mph or perhaps more with the strongest storms.” 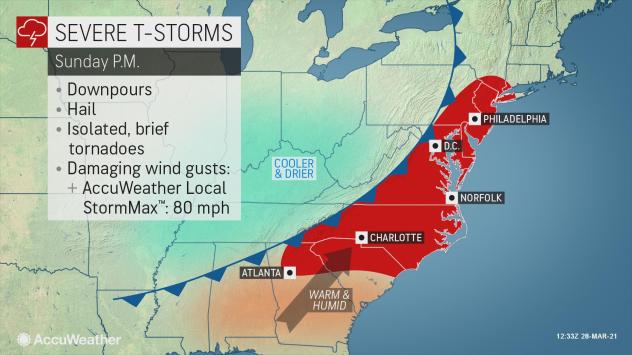 Some of the stronger storms may also produce hail. Areas that get hit with multiple storms will face a higher risk for flash flooding.

As is often the case, the thunderstorms are forecast to erupt along a cold front that slices into warm and humid air.

“The overall storm and trailing cold front are not anticipated to be as strong as the system that hammered the South so hard on Thursday,” Sojda said, “However, it will still pull plenty of warm air on gusty winds far enough to the north to warrant the potential for severe weather in much of the mid-Atlantic.”

“Damaging wind gusts could get as far north as southern New England, including Boston” Sojda added. 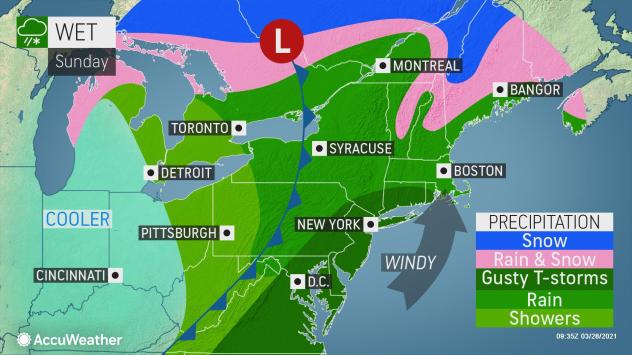 “Farther north, from eastern Pennsylvania into New England, any damaging wind gusts may be brought by torrential downpours with little or no thunder and lightning,” warned AccuWeather Senior Meteorologist Dan Pydynowski.

Anyone outdoors could be caught off guard as the fast-moving downpours arrive without the warning of distant thunder as they approach.

As is the case with many storms this time of year, this storm will have a wintry side as well, with snow expected to blanket parts of southeastern Canada and northern New England and the Adirondacks Sunday night into early Monday.

Many places in the Northeast have had a relatively dry March, especially when compared to how wet and snowy February was. Most locations from Boston to Washington, D.C., have had only 1-2 inches of rainfall so far in March, compared to normal rainfall amounts of 3-4 inches.

Yet despite the relatively dry weather in March, a couple of recent heavy rain events in the Northeast have created more saturated soil and could still heighten the flash-flood threat. Much of the rain that has been recorded in these places for March has happened within the last several days.

“Luckily, the afternoon storms will be moving along pretty quickly, so prolonged heavy rain and flash flooding is unlikely.”

The Rich Kids Who Want to Tear Down Capitalism